Dads down under & other differences between the UK, NZ, Oz & Canada

This weekend, dads around New Zealand and Australia are preparing to be spoilt – Kiwis and Aussies celebrate Father’s Day on the first Sunday in September (might be a bit of a problem if your UK-based dad is used to getting Father’s Day love on the third Sunday in June).

So, what other things might you have to get used to if you swap a home in the UK for life in New Zealand, Australia and Canada?

You can wave goodbye to your UK spring and summer bank holidays – but move to New Zealand and you gain Waitangi Day, Anzac Day and Labour Day while certain areas of Australia enjoy Labour Day and Melbourne Cup Day too. Not forgetting that New Zealand and Australia are patriotic too – they even get Queen’s Birthday as a public holiday. Canada doesn’t do badly either with Canada Day, Labour Day and Thanksgiving Day.

By that we mean the little dialect differences between the countries. In the UK and Canada, every summer you drag out your flip-flops. In Australia, it’s your thongs (conjuring up all kinds of potentially embarrassing situations) and in NZ it’s your jandals. Should someone compliment you on your pants in Australia, New Zealand and Canada, they haven’t suddenly developed x-ray vision and you haven’t had an acute attack of forgetfulness – that’s their equivalent of trousers. While we’re on it, pack your gum boots for life down under (Wellington boots) and your runners for Canada (trainers). 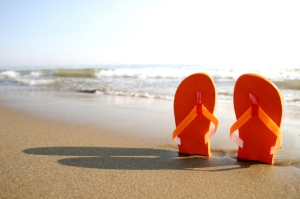 Luckily, Canada’s in the northern hemisphere too so it’s easy to adjust to summer in June-August and winter in November-February. However, head down under and prepare to get Christmas on the beach and when you’d traditionally be enjoying some summer sunshine in the UK, to be embracing winter sports in Australia and New Zealand instead.

Time difference – or how not to annoy your mum

Judging by the phone in your pocket, bag or lovingly placed on the table in-front of you, you like to be connected. But catching your first midday wave in Oz or trying your first eggs bene brekkie in NZ is not the time to call your nearest and dearest back in the UK – unless you fancy rousing them from their slumber that is. However, if you come across your first moose in Canada you don’t have to wait too long to let your mum know – it’s only a four or five hour time difference.

If you moved overseas, what do you reckon you’d miss most about home?